Bitter Pill: When A Prickly Aging Parent Needs Your Help

Is it our duty to care for aging parents who were—or are—awful?

My mother-in-law was mean.

When I was first dating her son, Vera welcomed me into her home. She courted me with pictures of her son as a toddler and platters of homemade pound cake. But at some point after I wrested her thirty-something child away from her, married him, and had a couple of babies, it got difficult.

Our experiment in sharing love for the same man was like a slow-burning brush fire that could never fully be doused. For her part, she seemed unable to prevent each and every callous thought from flying out of her mouth. For mine, there was stubborn unwillingness to ignore even the smallest slight—and defiance when she tried to assert control.

I respect a lot of things about Vera: She had been a single, working mother, raised a kindhearted son, and dealt with terrible hardship and loss in her lonely life. I feel for her. But that doesn’t excuse the times she pretended to choke on my cooking, or when she compared me unfavorably to an array of barnyard animals.

And now my work in this relationship is to hold both my respect and anger, at the same time as she slips away.

Vera was diagnosed with Alzheimer’s eight years ago—ten years into my marriage to her son. I suspected it might be a rough ride so I turned to the internet for information about what we could expect. I found a glut of articles romanticizing the sunset years, with softly-lit photos of loving adult children beaming into the dancing eyes of their adoring elders. There were placid white-haired grandmas strolling through blooming gardens and granddads doing puzzles with serene middle-aged daughters.

I found an extraordinary amount of handholding. So, so, so much tender handholding. Evidently, the internet had not met Vera.

I’m sure some model parent-child relationships exist, but these photos surely are the “best of” collection. I suspect most family relationships are more complicated—particularly as people move into the “I’m too old to change” and “I have no filters” phase of life. My gag reflex to the spunky grandpa and pastel-wearing grandma photos made me wonder…

Is it our duty to take care of aging parents who were—or are—awful?

I turned to friends for advice. Not really! I met friends for coffee and complained a lot, then they told me their stories. Now in our forties and fifties, my peers and I are working double time managing families, jobs, college tuition payments, retirement planning, and our own health surprises while also attempting to usher our elders through the final years of their lives with dignity. Most moments together are not suitable for framing. I was comforted to find that I’m not alone in my guilt and frustration.

My friend Thom’s father abandoned his family when Thom was in grade school, leaving Thom to handle a lot of his father’s responsibilities. “My childhood came to an abrupt end,” he tells me. His dad showed up a few years ago looking for help because he hasn’t saved enough for retirement and now has Parkinson’s disease. “You know, I’m taking care of my wife and sons. I have nothing to give the man who basically disappeared from my life.”

His solution was to help his father find an in-home care provider. Enter Victor, who helps with fixing meals, along with showering and going to the toilet. “Victor and my dad have a much closer bond than I ever had with him. Honestly, I’m a little jealous sometimes—pissed off, really. I know they have a different relationship. It wouldn’t be the same if I were there day in and day out. Even if I could be, I know it wouldn’t work. I just try to focus on being a good dad for my kids.”

It’s an expensive solution but Thom figures the cost to his sanity would be much worse if he had regular contact with his father. He provides what he can and stays away. It’s the best he can do.

Though I wanted the best for Vera—it was heartbreaking to see her struggling years ago to remember what day it was or how to use the telephone—my husband and I both knew that I wasn’t suited for a position on her caregiving “A Team.”

In the early stages of her disease, he had a rotating group of family and friends bringing her meals, checking on her safety, and running errands. Always a devoted son, my husband drove an hour and a half each way to visit her three or more times a week (each time greeted with “Where have you been?”—a wrenching reminder that no amount of physical presence was ever going to be enough). He’s since worked out an arrangement with a relative who provides day-to-day, live-in care, and still he visits several times a week.

My friend Candace doesn’t have it so easy. Last month, she found herself driving two hours while her children were in school to keep company with her father-in-law, Phil, after he broke a femur falling out of bed. She did this not because she likes Phil—she doesn’t even respect him—but because she loves her husband. His parents, Phil and Enid, are chain-smoking alcoholics in declining health. “Enid is chronically negative and self-centered,” she tells me. “They should have gotten divorced about thirty years ago because they’re just nasty to each other. Now, of course Enid is resentful of Phil’s sudden dependency.”

Candace thought she’d hang out with Phil and cook some freezer meals for them so Enid could get out of the house and Phil could catch some rest from her provocation.

“Someone has to go and my husband can’t do it. If my going prevents him from having to deal with his parents, then it’s totally worth it.” Her husband Mark’s relationship with them is so fraught that even short visits usually end abruptly when Enid lashes out. “They failed so spectacularly at nurturing and caring for him and his sisters that Mark spent his adult years distancing himself out of self-preservation.”

I realize Candace is stronger than I am. I only half-heartedly offered to hang out with Vera. And only once. My husband laughed.

Candace tells me she tried talking to them about finding a skilled care professional to take over, “but they don’t want a ‘stranger’ in their house.” They’d rather keep the verbal abuse within the family, I guess. We fantasize about bringing in non-family members to help maintain distance from our toxic relationships, and managing the guilt that comes with not wanting to interact with someone you’re “supposed to” care for. “I’m good for the short term, but I feel like we’re going to need a whole team of people who don’t have the emotionally loaded relationships that we do,” she says.

Just the thought brings with it a wave of shame, even though we can’t imagine what close continual contact with our in-laws might do to our marriages. Or rather, we can.

I never called Vera “mom” or sought her advice. I didn’t need to—she was generous about sharing her opinions. Over time though, I learned that she was someone who required patience (not my strength) and a thick skin to get along with. It may have taken years of tension headaches and hard work to find a comfortable relationship with each other, but we eventually found our footing. I started by asking her questions about herself and began to understand some of the hardships she’d suffered in her life. It wasn’t difficult to figure out what experiences had made her grow a suit of armor and forked tongue. And I think she realized that as the mother of her grandchildren, I had a significant place in her son’s life—just below her.

By accepting that I was here to stay and planning to raise my own children (I swear she thought she’d be cutting the umbilical cord and whisking them home with her after I delivered) space opened up for mutual respect. It’s a shame it took a decade.

I wonder about traditional cultures where elders are revered. Are any of those wonderful, wise grandmothers total bitches to their in-laws? Do those sage, respected grandfathers try to sabotage their kids’ marriages? How does that work in extended families who all live together in close quarters?

Maybe my angst is a luxury.

I suspect the answer lies in a lifetime of mutual respect. Something we’re too late for.

“My mother was abusive when we were growing up. She was a very angry, narcissistic person,” my coworker Natalie mentions when we’re grabbing a drink. She tells me that she and her sisters took turns caring for their mother when she was dying from cancer. “I was resigned to do the right thing when she needed me. My sisters and I agreed to take a month at a time. But then, it was weird, I noticed a dramatic personality change. Suddenly this woman, who’d always been prickly, just wanted to sit with me on the couch and hold my hand. I went through a lot of emotions about that,” she says. “I was resentful at first. I thought: ‘why couldn’t you have been like this all those years?’”

She tells me that eventually she found room for forgiveness. “It wasn’t like in the movies; there was no final dramatic moment where she apologized on her deathbed and I tearfully accepted. But through our actions, I think we made peace. It was subtle, but healing for me.”

I can only hope for that kind of grace. Three years ago, when Vera was placed on hospice and a Catholic nun came to chat with my husband and me, she told us: “This is her time. It’s all about her now. Celebrate her life and appreciate her in the final time you have together.”

I could have smacked Sister Marie Louise. It had always been all about Vera. We’d been playing the “last time” game most of our marriage: this is probably the last Christmas we’ll all be together… this is the last time we’ll celebrate her birthday… this is the last time we’ll take her out to a restaurant. A few months later, Vera “graduated” from Hospice Care. As we all knew, she’s a strong lady. Though she’s been bedridden for three years, does not talk or eat solid food, and has no discernible brain function, she is still with us.

I’m not at Natalie’s level but I’ve become a tiny bit better about letting go of my resentment, which doesn’t serve me well at all. I’ve tried to be a good friend to others who are also devoting huge reserves of their waning energy to people they dislike.

Ironically, a few years ago while visiting Vera, I got to experience a glimpse of what I’d hoped we could be. She didn’t recognize me when I went in to see her. I leaned in close and said “hello” in a gentle voice, like I would to a baby. She grasped my hand, as if to shake it, and babbled nonsense cheerfully at the nice lady who’d come to call. I smiled back.

She was at her best when she didn’t know who I was. It moved me, just a little. Maybe deep inside she had some warm feelings about me. I chose to believe that because, why not? I might have even held her hand.

Is your relationship with a parent or in-law “not suitable for framing?”

Hiring the right Care Professional can be a lifesaver (and a sanity saver). 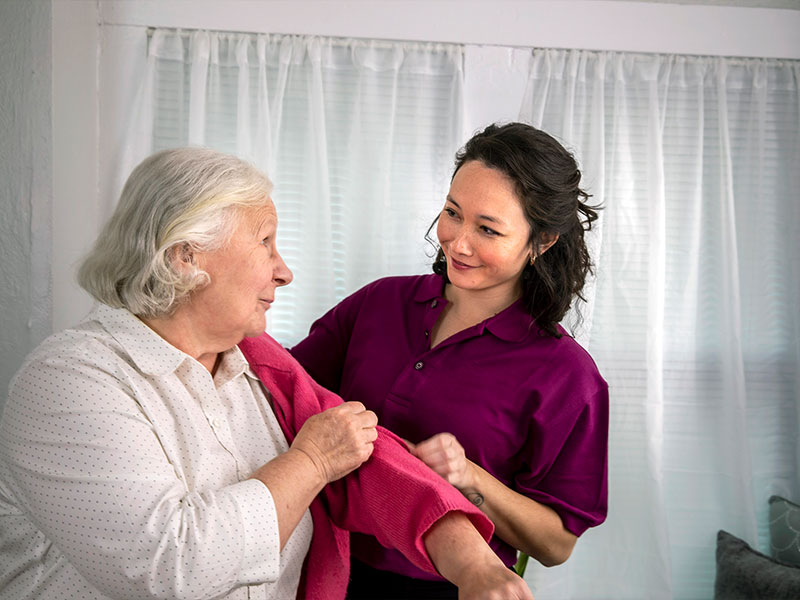